“There are no strangers here; Only friends you haven’t yet met”
William Butler Yeats

When one begins a hobby, you tend to focus on the hobby itself, honing in on the skills and techniques needed to accomplish the task at hand. Now there are those hobbies that have a social aspect to them, maybe it’s playing Sunday league soccer, a book club, etc. but for the most part, a hobby is a solitary activity.
Well, that was my thinking when I took up the hobby of toy photography. I’ll go to isolated areas to get great shots of toys and pay no attention to the passers-by, looking at a “full grown boy” taking pictures of plastic toys meant for children… That is what I expected to happen, but I found a completely different reality.
It started off slowly at first, but over the last year, it has gained momentum and increases to grow…

What I am talking about is the toy photography community and the friendships gained along the way. I am still learning just how big this community of like-minded creatives is. Whether you are an amateur photographer who uses their smartphone to snap pix or a “professional” who understands the complexities of lighting and composition, the end goal is the same: showcase your work, grow your skills and hopefully get some positive feedback and appreciation.
But it is more than that, you begin to strike a chord with people and start to build a friendship over a similar passion. TOYS! Now, although this community is surprisingly big, it is still a very niche community. Tell anyone outside of it that you take pictures of toys and 9 times out of 10 they’ll need you to elaborate- you usually have to get out your phone and show them a few images to get them on the same page.

Being apart of a community

But that’s the cool thing. Right? There is a group of us who just get it. No explanation needed. It seems to be a community that has no barriers to entry. Not even being in different countries halfway around the world stops budding friendships from growing.
I recently read Dave DeBaeremaeker’s (@therealstudiodave) article on his reflections on the past toy photographers safari (https://toyphotographers.com/2019/04/30/reflections-of-a-toy-safari-2019-edition/)
Now I have never been to one of the safaris, yet (holding thumbs for next year) but what I took away after reading it was the friendships that were made. Hanging out with old mates from the previous year while also creating new ones; is just one testament on how great this “toy family” is.
So to reiterate this point, I want to share my own personal outlook on this…

You‘ve got a friend in me

A while ago, I gained a new follower. Her name is Lorraine (@storymytoy). She has a really cool feed, and every so often, she’d put out a challenge for toy photographers. She’d come up with a theme, and you had to submit your entries. These became a lot of fun and had a core group of photographers who would often participate. Anyway, she liked one of my spiderman pics I did and began asking questions about how I achieved it.


We chatted back and forth, and she attempted to recreate the shot. Now she lives in Canada and speaks French, I am South African living in the USA, but that didn’t seem to matter. We struck up a friendship and started to collaborate on a few shots. She’d take the picture, and I’d help her touch up the final shot. On one occasion, I helped her with lighting a photograph with the help of facetime and google translator

Recently, L (as I like to call her) was diagnosed with a rare disease that has the potential to be life-threatening. She has had to undergo treatments and procedures as well as take an indefinite leave of absence from work.
So a group of us that know her from her storymytoy challengers got together to show her that her “toy photography family” are here for her. We designed a book, and each took a page to shoot an image, especially for L and write her a message. It’s a small kindness, but a very appreciated one.
With L’s permission, here is the layout of the book…


This is just one example of the many times that toy photography has brought strangers together and have made lasting friendships. I’m sure that each one of you reading this has a story you could share about making a connection with someone and striking up a bond. What is phenomenal is that our combined love of toys and photography gives us a golden pass into a really fantastic club where all the cares of the world melt away. Where distance and language don’t matter, and we grow in community and friendship because of a little plastic character…
And that brings me back to the quote at the top…
There are no strangers here; Only friends you haven’t yet met! 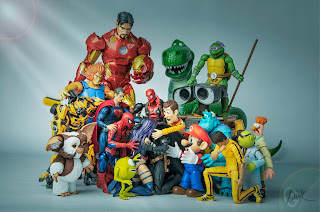